In a World Bank working paper comparing poverty reduction efforts across China, Brazil and India, Martin Ravallion finds that the Chinese success, while substantial is characterized by rising inequality, whereas India, while being more successful in economic growth than Brazil, has been the poorest in achieving poverty reduction outcomes. 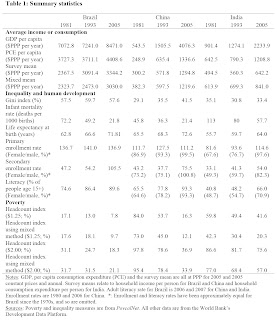 He attributes China's greater success to "growth promoting policies" and the "relatively low inequality in access to productive inputs (land and human capital), which meant that the poor were able to share more fully in the gains from growth". The high initial inequality in Brazil retarded both economic growth and constrained more widespread sharing of the benefits of economic growth. However, in the past two decades, it has been successful in poverty reduction due to "its greater macroeconomic stability" and "more effective and pro-poor social policies". As Prof Ravallion writes,

"Combining China’s growth-promoting policies with Brazil’s social policies would surely be a good formula for any country".

Prof Ravallion feels that India's income inequality (as opposed to consumption inequality which is low) and more damagingly its human development inequality have come in the way of more effective access to opportunities and sharing of the benefits of the economic growth, especially non-farm rural growth.

Interestingly, he argues that the secondary (industrial) sector played a less important direct role in poverty reduction in all three countries. In China, the growth in the output of the primary sector (mainly agriculture) was the main driving force in poverty reduction, whereas in Brazil and India, the tertiary (services) sector was more important.

He also finds that "Brazil (since the mid-1990s) and India (going back to the 1970s) have clearly been more aggressive than China in their efforts to attack poverty through direct interventions, such as using (conditional or unconditional) transfers".

Like the other studies on poverty reduction, Prof Ravallion also stresses on the importance of delivering better education and health care to India's poor (and thereby address the human development inequality), so as to equip them to "participate more fully from the opportunities unleashed" by economic growth.

Prof Ravallion concludes with two parameters to assess the relative success with poverty reduction in these three countries - pro-poor growth and pro-poor social policies. He writes,

"China clearly scores well on the pro-poor growth side of the card, but neither Brazil nor India do; in Brazil’s case for lack of growth and in India’s case for lack of poverty-reducing growth. Brazil scores well on the social policies side, but China and India do not; in China’s case, progress has been slow in implementing new social policies more relevant to the new market economy (despite historical advantages in this area, inherited from the past regime) and in India’s case, the bigger problem has been the extent of capture of the many existing policies by non-poor groups."

Martin Ravallion mailed me his response to Matt Berkely's comment

"Matt Berkley’s (cryptic) concerns appear to be baseless. If he had consulted the source paper, he would have found out that all the inter-temporal poverty comparisons being made in the study in question are real, i.e., they are assessed by deflating standard (comprehensive) measures of nominal spending or income by the most appropriate price indices available (including food prices, but not just food, since even poor people do not consume food alone)."

Posted by Urbanomics at 6:12 AM

1. Are economists recommending policies for starving people on this basis:

"statistics on their spending measured what they got in return"?


2. Why is it that economists are not forbidden by professional organisations from making arguments to this effect:

"starving people's income rose, therefore they were better off in terms of consumption poverty"

without looking at relevant food prices?

The Rise of Finance