SA Forum is an invited essay from experts on topical issues in science and technology.

Let’s be honest: The Sustainable Development Goals (SDGs), which the United Nations is expected to formally approve this week, are a mess. As they currently stand, the goals neither organize nor prioritize global efforts to improve the human condition while serving as stewards of the planet. As a result, they risk becoming an empty exercise that empowers business as usual in the field of global development.

Under their current structure, the SDGs comprise 17 goals that will be measured through 169 targets, which are, in turn, meant to be measured through 304 indicators. Whereas the U.N. attempted to create an open, participatory process for identifying the SDGs, a real effort to set sustainable development goals requires difficult decisions. The SDGs currently eschew these politics, and the result is a laundry list of goals largely irrelevant to how we think about the actual work of development in an era of climate change.

I’ll offer a small illustration of this challenge by citing the example of a single development initiative: providing weather and climate information to farmers. After years of study of one such program in Mali, my lab and I have found that although weather and climate information has tremendous potential to transform the lives of farmers in this part of the world, most of them cannot use the information. Simply put, farmers without draught animals and plows cannot respond to time-sensitive advice about when it is best to prepare or plant their fields. Therefore, to deliver climate services that live up to their lofty potential, we must first find means of addressing these asset deficits. Reality on the ground suggests that agricultural development comes first, followed by climate adaptation, which has implications for funding.

If we scale this problem to the level of the SDGs, their flaws become obvious. The noble effort to make the design of the SDGs open and democratic has instead produced a set of goals that protects everyone’s current interests, except perhaps those of the global poor. For example, alleviating global hunger (proposed SDG 2) sits alongside the goals of ensuring sustainable water and sanitation (SDG 6) and reducing inequality within and among countries (SDG 10). It is not clear, however, that we can achieve universal food security without the short-term (at least) drawdown of fresh water supplies or the production of new patterns of economic inequality as some farmers benefit from new agricultural opportunities more than others. If achieving all three of these goals concurrently is unlikely, which of them should we prioritize—and why? Which path gets us to the achievement of all three goals fastest, and most reliably?

The same problem exists for targets within goals. Again, take SDG 2: End hunger, achieve food security and improved nutrition, promote sustainable agriculture. To achieve this goal, one target (2.3) aims to double the agricultural productivity and incomes of small-scale food producers. Another relevant target (12.2) buried under a different goal states that we should, by 2030, reduce by half global food waste, including production and postharvest losses. Which of these is most likely to result in better food outcomes, both in particular places and at the global scale? Which of these should we focus on first with our limited aid resources? Picking production empowers one set of interventions and technologies whereas focusing on waste empowers another. Picking neither ensures that everyone engaged in this arena can continue as they have before, now arguing that their work is in service of an SDG and likely failing to move us to the achievement of any SDG in an expeditious manner.

The SDG process is too far along to start over. We now have our goals—and with some minor editing, we have our targets as well. But we can salvage this mess of a project and assure that the SDGs are more than a publicity exercise by pushing for leaders who will demand the process make choices and set priorities for these goals and targets, and who have the clout to ensure their standards are met. Realistically, this leaves us with the bilateral donors, such as the United States Agency for International Development (USAID), the U.K.’s Department for International Development (DfID), Germany’s German Corporation for International Cooperation (GiZ) and the Japan International Cooperation Agency (JICA) as well as perhaps the Bill & Melinda Gates Foundation. All of these organizations have the political clout to be heard, and the donor funds to use as a carrot or stick to ensure such demands are addressed. Whether anyone steps into this role either now or in future remains to be seen, but the outcome will determine whether the SDGs are valuable or another exercise in business as usual cloaked in platitudes.

Edward R. Carr is professor and director of the International Development, Community and Environment Department at Clark University.

Can Opioid Legislation Make a Dent in the National Epidemic?

2 hours ago — Tariq Malik and SPACE.com

The Battle behind the Periodic Table's Latest Additions

My Father, the Chemist, Teaches Anatomy

The Easiest Way to Get Fit? "Incidental Movement" is Key

Alien Anthropocene: How Would Other Worlds Battle Climate Change?

Discover world-changing science. Explore our digital archive back to 1845, including articles by more than 150 Nobel Prize winners.

Subscribe Now!
Sustainable Development Goals Offer Something for Everyone--and Will Not WorkBy not establishing priorities, the United Nations process sets itself up for failure 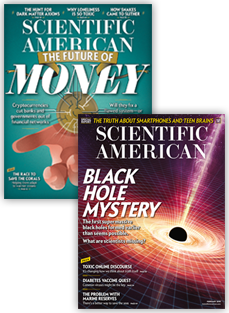